In early July, Tammy Perez, Habitat for Humanity of Tulare/Kings Counties first homeowner partner walked into the Habitat office and paid off her home mortgage after 22 years. Her monthly payments became a part of the on-going cycle of funding to support the now more than 61 homeowners who have joined Tammy in our homeownership program.

Tammy spent time with founding board members Bill Decker and Joan Marschall, Habitat staff, and past Executive Director Betsy Murphy, remembering the day she was chosen and the year she spent working on her home. Her most vivid memory is of getting the keys to her home on December 3, 1995, knowing that she would never again need to move her family.

“It’s my house”, Tammy said several times, “and I will never sell it!” She remembers moving from City to City as a child and never finishing a school year in one place. “I didn’t want that life for my 4 children” she said.

Habitat homeowner partners work up to 500 hours of sweat equity on their home or other Habitat projects. When the house is complete, the homeowner then purchases the house from Habitat with a no-profit, no-interest mortgage. Because those mortgage payments are made to Habitat, the staff has a long term relationship with each homeowner and together they work hard to keep homeowners in their home building strength, stability and self-reliance for the entire family.

Becoming a homeowner was a dream come true for Tammy and her 4 children. They were able to stay in one place, build relationships in the community and build a future that included having a place they could come back to. Congratulations Tammy and don’t forget to stop by and say HI!

If you are interested in learning more about home ownership with Habitat for Humanity give us a call at 734-4040 or email programasst@hfhtkc.org. 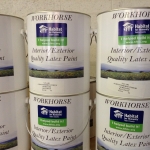 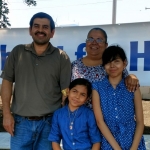