Much to Celebrate-More to Build
On January 17, more than 70 people gathered for Habitat for Humanity’s Annual Meeting and Volunteer Recognition event at the Wyndham Hotel.  Awards of recognition were given to volunteers who had donated more than 100 hours of their time serving Habitat for Humanity or the ReStore.  The event also focused on the start of a year-long celebration of 25 years serving hard-working, low-income families in Tulare and Kings Counties.

Since 1994, Habitat has helped 67 families become first time home buyers through its homeownership program, and 400 local families repair their homes, making them more affordable and safe. Starting with a volunteer board of directors they managed to raise the funds and build 3 houses before hiring the first executive director, Betsy Murphy, in February 1999.

The affiliate has grown from serving the City of Visalia to covering both Tulare and Kings Counties and now runs two ReStore outlets, in Visalia and  Hanford.

Habitat has accomplished a lot, but realizes that there is so much more to do. As they prepare to build two new homes in 2019, they are also building community by introducing businesses and individuals to Habitat for Humanity and encouraging them to come “Swing a Hammer” for Habitat.

The Community “Raises Walls” in Porterville 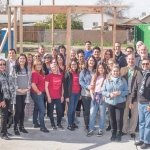 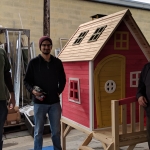