“We’re very appreciative that during such a stressful time, we’ve got such great community support and volunteers,” said Deanna Saldana, resource development director for Habitat for Humanity of Tulare/Kings Counties.

Friday marked the first day of a two-day Winter Women Build event at the organization’s first big project in the county, a four-bedroom, two-bathroom house at 403 W. Cameron St. in Hanford.

Saldana said being able to provide a decent and affordable place for a family to live is important, especially with many families struggling right now.

Volunteers like Anastasia Ochoa know the difference a home can make for a family.

Ochoa and her family were living in terrible conditions until 2013, when she and her husband were chosen to become Habitat homeowners in Visalia.

“Habitat has changed our life so much,” Ochoa said. “Because of Habitat, we were able to get out of that environment and now we have our forever home.”

Ochoa said she has so much to be thankful for — including a job at the organization — that she has taken every opportunity to volunteer at events like Winter Women Build. With all the negativity going on in the world, she said it feels good to be a part of an organization that likes to give back.

“When we became habitat owners, we gained another family,” she said.

A soon-to-be member of that Habitat family is Victor Gray, who was chosen with his wife to be the homeowners of the house on Cameron Street.

Gray said one day while visiting the ReStore, he took a chance and signed up to be a possible future homeowner, never thinking they would actually be chosen.

After a few interviews with the organization, Gray said he and his family were called into the ReStore for a third interview. What they didn’t know, however, was that they had actually been chosen as the future homeowners and were surprised with the news that day.

“It was kind of unbelievable,” Gray said. “I’d won small things before, but this is something that would change our future.”

Gray said he’s been at the home for every workday since the project started. He said it’s awesome to be able to work with professionals and build a house from the ground up.

“It makes me appreciate the house that I’m going to live in a lot more,” he said.

Gray said owning this home will give him a foundation to build financial stability and strengthen his family. He said by not having to worry about living month to month, he can focus on finishing college and starting his own business.

“Habitat for Humanity is really a blessing,” Gray said. “They are actively changing peoples’ lives for the better.”

Growing up in a Habitat home. 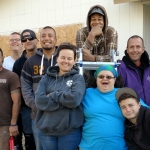 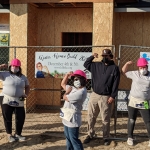